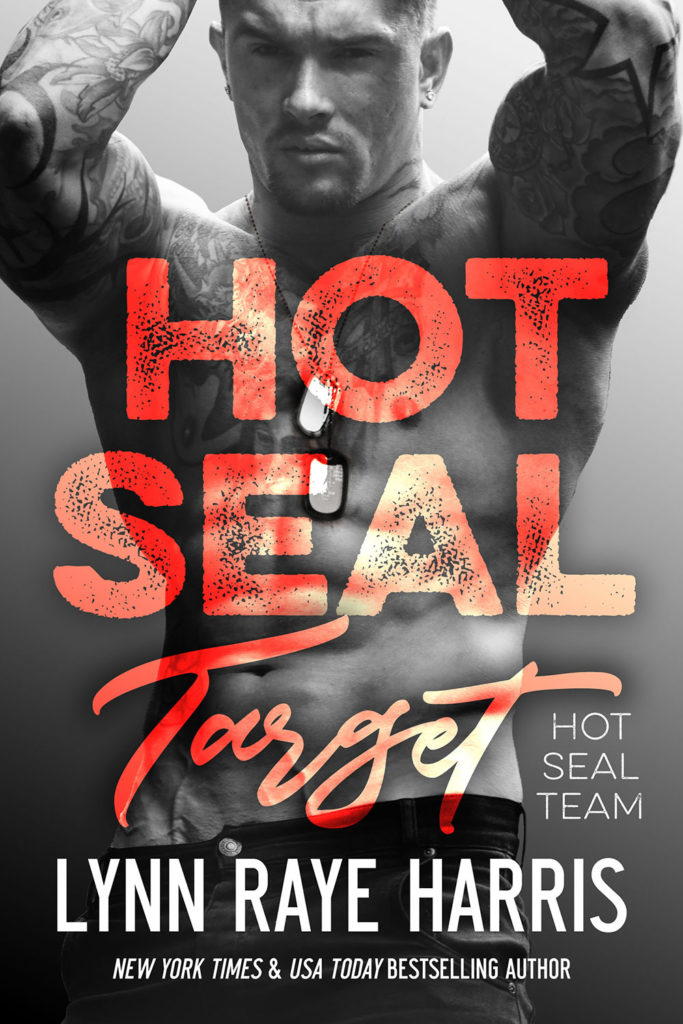 Navy SEAL Adam “Blade” Garrison’s assignment to infiltrate a tech billionaire’s criminal operations just got complicated. His cover: bodyguard for the man’s wife. His problem: Blade knows Quinn Halliday far too well. A sophisticated version of the chubby, shy girl Blade once knew, Quinn brings out all his protective instincts—as well as a few carnal ones that surprise him.

Quinn’s pride in having improved herself has turned bitter. She’s trapped in a relationship with a brutal man who views her as nothing more than a possession. Blade’s unexpected arrival makes her hope for more than a barren existence in a gilded prison. Until tragedy strikes, and Quinn realizes she’s next on the hit list.

Blade will do anything to shield Quinn from danger and keep her safe. But as they draw closer, an enemy works to flush them out. If he succeeds, he’ll put an end to Blade and Quinn’s budding happiness.

Unless Blade and his SEAL Team strike first…

Adam “Blade” Garrison sat in a conference room at HOT HQ and waited for someone to tell him what the hell was going on. An hour ago, he’d been at a housewarming party for one of his teammates. Shortly after he left the gathering, he’d gotten a call from Colonel John “Viper” Mendez ordering him to come in to work. So here he was, still wondering what the CO had meant by his cryptic comments about an assignment and a woman. 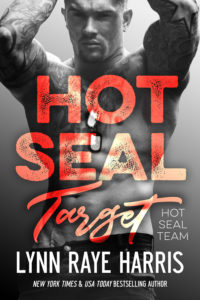 The door swung open and Mendez entered. His second-in-command, Alex “Ghost” Bishop, followed. A third man strode inside, and Blade’s gut tightened. If Ian Black was involved, you could be sure this assignment was going to be sketchy as fuck.

Blade got to his feet, but Mendez waved him off. “As you were.”

He sank onto the seat again, his gaze darting between the three men.

“Yes, sir. I also speak Cantonese.” Blade answered automatically before his brain processed the fact that Black had spoken in Mandarin. “My parents were international bankers,” he continued in Chinese. “I basically grew up in Hong Kong. I learned Cantonese because that’s the primary dialect there. But Mandarin is more useful in general.”

Ghost and Mendez watched them with interest, but Blade was pretty certain neither man spoke Chinese. Though scratch that, because with those two you just never knew. They wouldn’t reveal a skill unless they had to.

Black switched back to English. “Mandarin is a necessary skill for this assignment. Though Cantonese is certainly useful.”

Ghost dragged out a keyboard and called up a slide show. Blade stared at the man pictured on the first slide. He was older, probably about fifty, with graying temples and an arrogant expression that spoke to an infallible belief in his own superiority.

“Hunter Halliday,” Mendez said. “He owns Halliday Tech Solutions. Made a mint selling microchips for the personal computer market. He has strong ties to Chinese technology companies. He just signed a contract with the US government to supply computer mainframes to the military for their operations centers.”

“I take it there’s a problem somewhere,” Blade stated. It wasn’t a question.

“Hunter Halliday has a lot of ties to China, some of which aren’t quite as lily-white as he’d like us to believe,” Ian Black said. “I’m not willing to trust any Halliday products near military assets, quite frankly, but it wasn’t my decision to make.”

Blade frowned. “So if you don’t get the evidence to prove he’s up to something, the military will soon be relying on his equipment in their ops control centers.” Which was like taking over the brain in order to control the body.

Blade slewed his gaze to Mendez and Ghost. Mendez was as cool and unreadable as always. Ghost was only slightly less so. If they were both here, on a weekend, then this was a seriously big deal.

“So where do I come in?” Blade asked the three of them.

“Mrs. Halliday,” Mendez said as the slide flipped to a picture of a woman.

Blade’s gut tightened. She looked familiar. He knew her, but how? She was gorgeous, and he didn’t think he would have forgotten a woman like that.

And then it hit him like a ton of bricks. Impossible.

It couldn’t be her. Could it?

“There’s been a mistake.”

The woman on the screen was beautiful. Incredibly so. The Quinn Evans he’d known had been terminally shy and extremely overweight. He’d met her when his parents moved to London during his junior year of high school. Some kids were bullying her in the hallway, calling her fat and telling her to be careful or she’d fall through the floor when she took a step. They hooted and howled and called her a pig. Tears had been streaming down her chubby face—and Blade had snapped.

He didn’t know why he’d cared, but there was no way in fuck he was letting those assholes break her down any more than they already had. He’d grown up in Hong Kong, learning to fight and participating in mixed martial arts bouts that sprang up in the meaner districts of the city. So when he’d turned his anger on those punks, they’d scattered.

And they’d never bothered Quinn again. She’d taken to following him around shyly, and he’d mostly ignored her. He’d had big plans for himself, and he wasn’t going to get bogged down in relationships—friendly ones or romantic ones—that made leaving hard when the time came.

When he’d finally realized Quinn wasn’t going to stop following him, he’d sighed and turned and started talking to her. They’d become friends in spite of his self-limiting beliefs. Quinn was funny and smart and pretty in her own way. He’d encouraged her to believe in herself even when she didn’t want to. He’d never thought of her romantically, but he’d cared for her more than he’d cared for anyone during that time.

They’d been friends for nearly two years when they graduated and went their separate ways. They’d stayed in touch for the first couple of years, but gradually they’d stopped communicating. Or maybe he had. It was hard to be in touch regularly when you were a SEAL.

“Mrs. Halliday was a fitness blogger and a model,” Mendez said as Ghost clicked over to a montage of a very slender and toned Quinn posing in a bikini.

“She moved to New York, where she met Hunter. They dated on and off for a few months before they married. Immediately afterward, she stopped working. No more blogging or photo shoots, though her blog was very popular at the time. Millions of people wanted her advice on losing weight.”

“She married a billionaire. She probably didn’t need the money,” Blade said wryly. He let his gaze drift over the photos. Holy shit, what a transformation. He was proud of her. Not because she was thin but because she’d made up her mind and gone after her goal. She’d always said she wanted to walk into a store and buy something off the rack instead of needing to go to a special store and pray they had something big enough to fit. And by God, she’d done it. She’d really done it.

Ghost flicked to a new slide. This one was more recent. Blade could tell because her expression wasn’t the same as in the earlier photos. It was less… happy. Yeah, that was the word. She’d looked free and proud in the pictures of her fitness modeling. She looked troubled in this photo. Like a dark cloud had settled over her life and wasn’t budging.

“I knew Quinn a long time ago. If you think she’s going to tell me all about the dirty dealings of her husband, I think you’re mistaken,” Blade said to the other men.

Ian Black lifted an eyebrow. “Quite frankly, we don’t know if she’s in on it with him. So no, I don’t expect her to confess to you. There are rumors she’s tried to leave him but he won’t let her go.” Black shrugged. “Could just be gossip to try to deflect any suspicion from her.”

Blade was still trying to process the possibility that Quinn was guilty of conspiracy. Her mother was British, but her father was American. She’d been born in Atlanta, Georgia, and she had dual citizenship. He liked to think she’d care at least a little bit about her country. Enough to not betray it, at any rate.

Then again, he’d met a lot of people over the years who didn’t give a shit one way or the other. Money was a powerful motivator. And there was no doubt Quinn was living a life far removed from the one she’d led when he knew her. Her parents hadn’t been dirt poor or anything, but they certainly hadn’t been rich. Her mother worked in the same bank as his parents. Her father had been a businessman of some sort. Not banking though. A manager in a retail store or something. If Quinn left her husband, what kind of life would she lead? Not the kind she currently had, that’s for sure.

“Then what do you want from me?” Blade asked. Because he was thoroughly confused about the entire situation. It was clear they’d brought him here because of his past relationship with Quinn. And because he could speak Chinese.

The three men exchanged glances. It was Ian Black who spoke. “You know I run a mercenary outfit,” he said. “I’m the guy people call when they want stuff done. I’m a fixer, a man willing to work for anyone, the kind of guy who’ll take anybody’s money so long as it spends. Including Hunter Halliday’s.”

Blade didn’t believe it for a second. He’d been involved in more than one operation where Black was clearly on the right side of the situation. The man was a patriot regardless of how he operated. In fact, his operations were nothing more than a cover for the important work he did in protecting the country from traitors and terrorists. He worked for the same reasons HOT did, even if he did it differently.

“Mrs. Halliday needs a protector. Her husband asked me to find one for her.”

Blade’s hackles rose. “Is she in danger?”

“Hunter is a collector,” Black said. “He likes beautiful things. Mrs. Halliday is a possession, a one-of-a-kind object he intends to protect—or imprison. Not sure which. But if she’s in danger, he’s the one who put her there.”