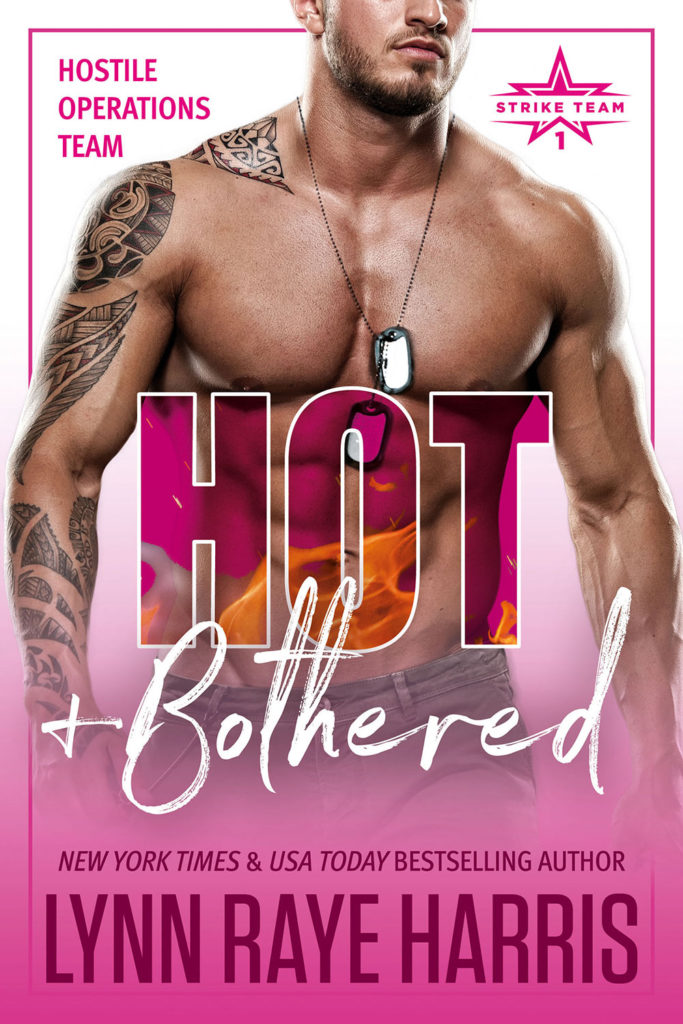 He can never have her. Having her means the end of his career in the Hostile Operations Team. But when he learns she’s carrying his child, he’ll have to make a choice…

Ryan “Flash” Gordon has been drawn to Emily Royal bin Yusuf since the first moment he met her. But she’s a terrorist’s widow, which means she’s completely off-limits. A HOT special operator can never be with a woman whose name is on government watch lists the world over.

But when Emily begs him for just one night, he can’t refuse. The next morning, she’s gone. Not just from his bed, but from his life.

Emily can never clear her name—or can she? When a rogue CIA operative offers her a chance to put her past behind her and do something for her country, she leaps at the opportunity—even though it means leaving behind the man she’s fallen in love with. But not before she lets herself have one night with him.

One night with stunning consequences…

There was only one woman Ryan “Flash” Gordon wanted, and she was off-limits. Hugely off-limits. So off-limits that his balls tightened just thinking about the potential rage machine her sister would unleash on him if he touched her. 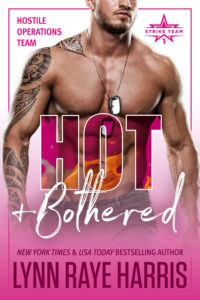 But that one woman had just walked into Buddy’s Bar, where HOT hung out in their downtime, dressed in a pair of faded jeans and a leather jacket. Her blond hair was loose and flowing down her back, reaching nearly to her ass. The long strands curled at the ends, and Ryan imagined wrapping his fists in those locks and tugging her to him so he could ravage her mouth with his own.

She looked up from where she’d gone to stand with her sister, her gaze meeting his. Her brown eyes softened a little, and his heart kicked in his chest.

Goddamn, why had he let himself get tangled up in this? Why had he let her keep texting him, talking to him, calling him in the middle of the night so she could tell him about her day?

Emily Royal bin Yusuf—it was critically important to remember the bin Yusuf part, because no one else was going to forget it anytime soon even though she’d dropped her married name—was the saddest person he knew. And no wonder, considering what she’d been through. He knew she’d had drug and alcohol problems as a teenager, and he knew that when she’d met Zaran bin Yusuf, the man had given her what no one else could at that moment in her life.

A hand clamped down on Ryan’s shoulder. He worked hard not to react, not to slam whoever it was into the floor and ask questions later. Good thing, because Nick “Brandy” Brandon was standing there grinning at him.

“Lighten up, Flash. Here’s your beer.” He handed over the ice-cold bottle of Sam Adams.

Brandy’s expression grew serious as his gaze strayed to his fiancée. Victoria Royal stood with Emily, their heads bowed together as they talked. Victoria had quietly set her beer aside the instant Emily appeared. Ryan knew she wouldn’t touch it again while Emily was at the bar.

Ryan’s stomach tightened. Yeah, he knew about that. When Emily had asked him what she should do, he’d told her to go with her gut. She hadn’t replied for hours. Then she’d told him she’d accepted the guy’s invitation to see a band at a bar.

It had been everything Ryan could do not to howl. He’d made sure, however, that she texted him her whereabouts. He’d been poised to leap into his car and go rescue her if necessary. Hell, he hadn’t slept that night until he’d heard from her.

Then HOT had been on a mission and he’d been out of pocket for weeks. Weeks in which he’d gone crazy imagining Emily dating some guy, needing a friend to talk to and having nowhere to turn.

When Ryan had returned Stateside just a few days ago, he’d been relieved to find messages from her on his phone. He hadn’t seen her until today though. And it was killing him that he couldn’t wrap her up in a hug and tell her how glad he was to see her.

“I think Emily is stronger than anyone gives her credit for,” he said, watching her again. And then he took a swig of his beer to cover the awkwardness as Brandy looked at him.

“Maybe she is,” Brandy finally said before turning to watch Victoria and Emily. “God knows a lesser woman would have crumbled under the weight of everything that happened out there.”

Ryan knew he meant Qu’rim and the mission that had almost ended in Brandy and Victoria dying. Until Emily saved them. She’d had to kill Zaran to do it, but she hadn’t hesitated.

Ryan had killed before. It was the job, killing those who wanted to kill him. Protecting the nation. Stopping the bad stuff before it happened.

But Emily wasn’t a black-ops soldier. She wasn’t trained. She’d stabbed her husband with his own knife, and she was never going to forget the moment when the blade sank into soft flesh and the man she’d once cared for bled out on the floor.

Ryan had met her for the first time only minutes after. She’d been covered in blood and mumbling “Oh God” over and over again. He’d tried to comfort her. Sometime in the next few days while her sister recovered from her own wounds, Ryan had found himself drawn to Emily’s side.

She’d clung to him, figuratively, and she hadn’t stopped in the months since that night. Nor did he want her to, even though he knew it would be best for her. Best for them both.

Victoria turned a worried glance toward Brandy, and he made for her side without another word. Ryan sat there, staring at the three of them and wishing like hell he had the right to go to Emily. Finally Brandy handed her a drink from the bar—a sugary Coca-Cola because Emily didn’t do diet—and she slipped the straw between her lips.

A minute later she strolled away from Brandy and Victoria while their attention was on Matt “Richie Rich” Girard and his fiancée, Evie Baker, who’d just arrived. Evie was still brushing snowflakes from her jacket as Matt tugged her into his arms and wrapped her in a hug as he said something in her ear that made her laugh.

Ryan envied them—envied all his teammates who’d found love—but he knew it was easier for some than for others. His gaze landed on Garrett “Iceman” Spencer and Grace Campbell. Now that was a pairing he’d have never expected, but somehow it worked. Grace softened Ice’s edges. Ice roughened up Grace’s polish. It was perfect.

Ryan’s entire body tightened at the sound of Emily’s voice. She’d come up on him when he wasn’t watching for her, and her presence socked him in the belly like always. He concentrated on keeping his breathing slow and even. “Same as when you asked me in your text last night.”

Emily didn’t get too close, but then she didn’t stay away either. Her eyes were fixed on his face. Her cheeks were still pink from the cold weather, and she smelled like apples and cinnamon. He’d never pressed his lips to her skin, but he wanted to. Especially now, when he hadn’t seen or heard from her in weeks.

“I missed you,” she said softly.

He swallowed. “Nah, you just missed having someone you could bug with your econ homework.”

She normally would have laughed at that. She didn’t this time. She just shook her head. “No, it was you.”

Ryan’s fingers tightened on the beer bottle before he set it on the table behind him. “Guess I should go away more often if it makes you miss me.”

He said it jokingly, which was his default setting for emotion. He’d learned early in life to never let anyone see how things hurt you. Always keep them guessing with a smile and a joke. It was the safest way.

“You’ll always go away, Ry. And I’ll always miss you when you do.”

“You shouldn’t say things like that. What will Caleb think?”

Her cheeks grew a touch pinker, and he instantly regretted his comment. “I broke up with Caleb.”

He didn’t like the way that made his heart leap. “Oh? Sorry.”

She turned and leaned against the same table he was leaning on. Her scent overwhelmed his senses, made him want to close his eyes and breathe in. It had been a hard slog out there in the desert, chasing after those assholes who’d taken a group of Americans hostage. The things they’d done to one of the Americans before HOT arrived… it was enough to make a hardened warrior want to cry.

“Did he…?” He didn’t know what to ask. He only knew that if the guy had hurt her in any way, Ryan was going to go Full Metal Jacket on his ass in the next hour or so.

“It’s only been a few months since…” They both knew since what. He cleared his throat. “It takes time. You don’t get over that kind of thing overnight.”

She turned to look at him. He could feel her eyes boring into his profile, but he refused to make eye contact.

“I am over it. I killed a man, but it’s no different than what you and my sister do. Zaran was a terrorist. It was him or me—and I chose me.”

This time he did look at her. At her small, waiflike form beside him. So delicate and pretty. She might have killed, but she wasn’t a killer.

“I know that, Emily. You did what you had to do. I just don’t think you should expect that life goes back to normal in a certain amount of time. It might take you another year to kiss a guy. Or maybe it’ll be next week.”

God, he hoped not. He didn’t want her kissing anyone.

She snorted softly. “Who knows what the future will bring?” She set her Coke on the table and stood. “Maybe I’ll kiss someone tonight.”

“Just don’t do it in front of Victoria,” he shot back. “She’ll castrate the poor guy.”

Emily shook her head. And then she straightened, looking fierce and unafraid. “She has to realize I can take care of myself. You all do, actually.”

“Have I ever said you couldn’t?”

He felt the sting of that accusation. “I’m your friend. I’m supposed to care.”

One pale eyebrow arched. “Yes, you’re my friend. You’ll always be my friend, won’t you, Ryan?”

He didn’t like her tone, the way she seemed a little hesitant. “Of course I will. We were in combat together. We’ll be comrades forever.” 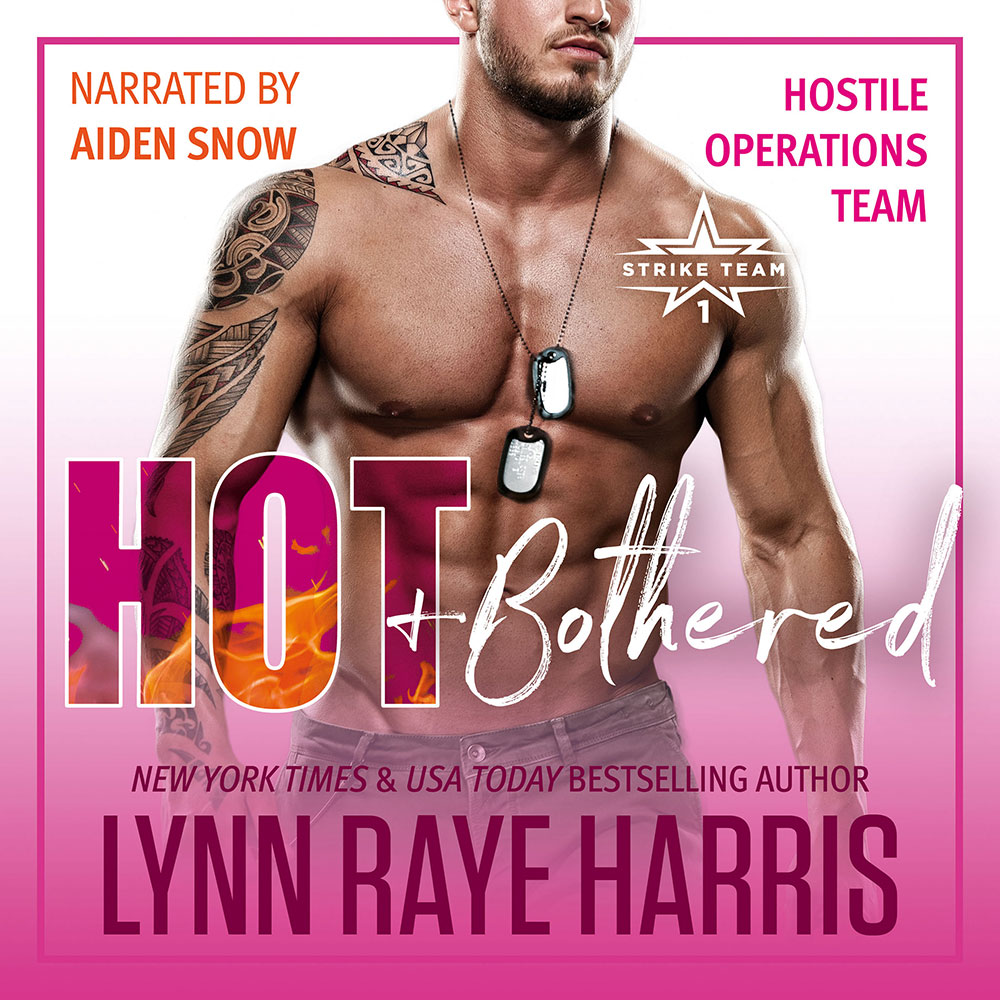